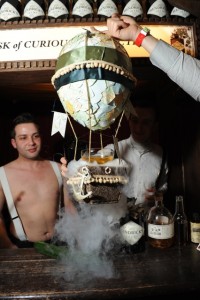 Genteel spirits, delightfully peculiar cocktail umbrellas and cucumber sandwiches all round at the most anticipated cocktail competition of the year.  Eight leading bartenders from across London were challenged to create a most unusual cocktail umbrella design and cocktail for showcasing in the Emporium.  On Wednesday 12th October, the bartenders were escorted in the Hendrick’s Cucumbermobile to the Emporium ready to display their cocktail umbrella creations.  Each of the bartenders (as listed below) were pitted against each other in a most delightful Cucumbrella Cup competition, in front of an invited audience of their peers.  Umbrellas were raised in salute to the winners of a tightly voted contest  – Aaron Jones & Pierre Dos Santos from Salvatore at The Playboy Club with The Balloon Umbrella & The Phileas Fogg cocktail.

Bartenders and Their Cocktails

– The New Black, created by Thor Bergquist from Experimental Cocktail Club with The ECC Umbrella

– Tea in the Rain, Created by Ryan Chetiwardana from Worship St Whistling Shop with The Punch Bowl Umbrella

– The Phileas Fogg, Created by Aaron Jones & Pierre Dos Santos from Salvatore at The Playboy Club with The Balloon Umbrella

– Chai Ti, Created by Marian Beke from Nightjar with The Bartool Umbrella

– One week with Mr Hendrick’s, Created by Miraim Lorendova from Quo Vadis with The Quo Vadis Umbrella

– Spontaneity, Created by Alex Kratena from Artesian, The Langham London with The Artesian Umbrella