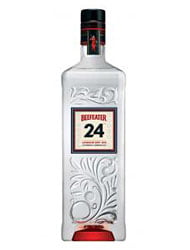 Beefeater 24 is a new luxury super premium addition to the Beefeater Gin portfolio launched in October 2008. Like its revered sister Beefeater Dry, Beefeater 24 is made in the heart of London at the Kennington distillery a ball throw away from the famous Oval cricketing ground.

Like Dry too it’s made by the time honoured steeping method. Here the copper pot stills at the Distillery are charged with neutral grain spirit, then the botanicals are carefully measured in and the mixture left to soak for 24 hours. From this process and the fact that London buzzes 24/7, Beefeater 24 takes its name.

Master Distiller Desmond Payne has applied his 40 years experience to the creation of 24. Having long been fascinated by the potential of tea in the botanicals mix he was delighted to discover that the father of James Burrough had been a tea merchant in London supplying fine teas to the Royal Household. Building on this historic link to Beefeater’s founding father, his voyage of discovery began. After almost two years of constant experimentation, the journey is complete.

Beefeater 24 is a London Dry Gin, which means that no colouring or flavour has been added after distillation. The recipe includes the core botanicals that define the distinctive, instantly recognisable Beefeater taste – juniper, coriander, angelica root and seed, Seville orange peel, lemon peel, orris and almond. To these are added a unique blend of Chinese green and rare Japanese Sencha teas, extra citrus in the form of grapefruit, and liquorice. The spirit is ‘cut’ at an earlier stage and a smaller percentage of the run is taken in order to retain the fresher, more volatile flavours of grapefruit and the leaf teas. On the nose notes of citrus, juniper and the aromatic scent of Sencha are immediately apparent. In the mouth there’s a burst of citrus followed by juniper developing into a long finish with spicy coriander balanced by the dryness of angelica and the woodiness of liquorice. Bottled at 45% abv, Beefeater 24 is a glamorous, sophisticated spirit that takes gin to a whole new level and has inspired some of the world’s top mixologists to come up with stunning new cocktails.