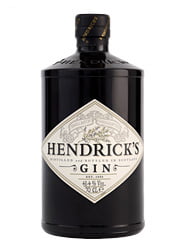 Hendrick’s Gin is the brainchild of long established whisky distillers, William Grant & Sons, producers of some of the best malt whisky in the world.

Distilled and bottled in Scotland, Hendrick’s is a super premium gin with a subtly different botanicals recipe that includes a unique infusion of rose petals and cucumber alongside more traditional botanical ingredients. Hendrick’s specializes in being different with a distinctive toffee-brown bottle that is reminiscent of an old fashioned apothecary’s bottle, a clever reference to gin’s medicinal origins.

Sophisticated marketing focuses on a “Most Unusual” theme to highlight the brand’s quirky nature. But, Hendrick’s is no gimmick and, yes, cucumber and rose petals do bring something new to the gin taste spectrum enhancing the classic juniper and citrus flavours with fresh, floral, slightly aromatic notes and a silky smooth texture.

Hendrick’s is handcrafted in small batches in an original 19th century pot still, acquired by William Grant and Sons in the 1960s. The botanicals are charged in the still along with a 98% exceptionally pure neutral grain spirit the day before distilling and allowed to steep until distilling itself begins. ‘Steep hours’ are precisely timed to ensure consistent extraction of the flavour components of each batch of Hendrick’s. Once the distillation is complete and has been tasted for quality and consistency, final distillations of rose and cucumber are added. Hendrick’s is bottled at 41.4% alcohol by volume in the UK and 44% alcohol by volume in the US so in many ways it embodies traditional big brand gin values. A crucial player in the great gin revival, Hendrick’s Gin is now found in all the best bars and restaurants on both sides of the Atlantic and in more than 20 countries across the world. You’ll recognise a Hendrick’s G and T by the wedge of cucumber that has replaced the traditional lemon or lime slice.

It’s also available on line at thedrinkshop.com and drinkon.com as well as the best bars and hotels wherever you are. For more information please visit: