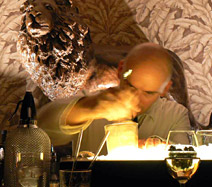 Could there be a gin brand that’s captured the imagination quite as much as Hendricks? From its brown hued apothecary bottle to its quirky marketing campaigns the ‘Most Unusual’ Gin certainly deserves its place in the most interesting drinks cabinets and stylish back bars. One of Hendricks’s secret weapons is exotically named Brand Ambassador, Xavier Padovani, who won the Tales of the Cocktails top mixologist Award in 2008. Juliet Lawrence Wilson gets the lowdown.

“The award doesn’t mean I’m the best but only acknowledges the hard work I’ve done with our team during these last years. People notice Hendrick’s because we don’t work as everyone does and do not promote our brand as everyone would. Our Cucumber Scottish Juniper Elixir is different and unusual. On top of that, being a family business, we do business in a special way. But it was good to receive recognition for all the hard work and I felt very, very privileged!”

One of the most fun aspects of Hendricks’s marketing is The Chaps. Led by Louis Lewis Smith, this merry band of tweed clad gents get up to all sorts of japes in the name of Hendricks Gin, including croquet championships and kissing booths, naughty Chaps that they are!

“ I have a feeling that Louis is working on something very, very unusual and quite icy for the early winter. For the summer there’s also something very big. On a global level we continue the adventure which we started two years ago while drinking Dickens inspired Hot Gin Punch in tea cups with our Fantastic & Ridiculous Monday of the Unusual Rose and Cucumber Society.”

With events planned globally and a tribute to the oldest music hall in the world where the first ever Can Can was produced (then promptly banned) it seems there’s a busy time ahead for Padovani.

“We are truly taking over the world Cucumber style as we move to new markets and introduce our brand to more Chaps & Chapettes!”

There are also some slightly more serious projects on the go, including a film of the distillation process being made at the Girvan distillery.

“Because we use two different copper stills, the Bennet and the Carter Head, which work in a totally different way, this movie will be good to showcase production so that all the bartenders involved with the brand whilst serving a Cucumberised G&T will know exactly how we make our Scottish Chum!”

Seems like enough to be going on with Xavier… Oh but there’s more:

Crikey! Padovani also has lots of enthusiasm for the industry in general.

“I believe that gin is back! It was quite under rated in the 80s; one innovation or two slowly brought fresh blood to the category but there wasn’t much happening. In the 90s, gradually, the industry took a bit more interest. Today there is a new gin every day! Gin is made all around the world and it is also now made using so many various ways, the choice for consumer is getting bigger and bigger! That doesn’t essentially mean that they are all good gins but it brings more interest to the category and as a result the category as a whole is growing, and that is very exciting!”

I think it’s safe to say Padovani is a pretty chipper kind of gent. Being a gin Brand Ambassador sounds like the most glam job ever, what does he enjoy about it?

“Firstly, the people I meet, the relationships and the fact that I get to see all sides of the market and be involved with every single aspect of it. As an ambassador you live the brand so it would be very difficult to work for a company or a brand that didn’t hold the same values. William Grant & Sons is a Scottish independent family owned company with a strong belief in the brand. The company encourages creativity which enables us to always push the limit and challenge the so called conventional (boring) marketing approach that was long associated with gin.”

What, no Ferrero Rocher, Ambassador? Padovani did, however get to make his Hendricks Hot Punch for Prince Charles. Did His Highness like it?

“I sadly won’t be able to tell you if he liked it or not. But after the short conversation we had I assume he found the brand interesting. When you next stop by Clarence House you might somehow quite possibly see our favourite Scottish Cucumber chum rubbing shoulders with The Duke of Rothesay and his peers…”

Cucumbers in Clarence House? The mind boggles. Any other A-listers fond of the Most Unusual?

“I have met many gin aficionados who are quite partial to our beloved Juniper Elixir! But it would not be Gentlemanly to drop names… Let’s just say that you’d be as surprised as I was!”

No Xavier, I do not agree: I wanted you to spill the beans! How did he get interested in cocktails in the first place?

“I have two gentlemen I need to salute here as these are the two I worked with at a very early stage and they gave me a passion for anything that with taste: Joel Salzi and Paul Bocuse in Lyon.”

Did he have a mentor in the early years?

“I started around ten or eleven years ago and I was taught my first Manhattan by Patrick Duffy at the upstairs cocktail bar of Quaglino’s in London Mayfair! It was a classic time: white jacket, Manhattan, Old Fashioned… The Cosmo was just arriving, as were the cool cocktails. Many guys at Quag taught me something different just by watching them. I was then privileged to work with or observe a few of the crew running some of London’s best watering holes, people such as Henry Besant, Ben Pundole, Heath Ball, Eric Yu, Dimitri Douglas, Nick Strangeway… Today when I see Salvatore Calabrese running the floor or Joerg Meyer mixing drinks at Le Lion in Hamburg, Jason Scott opening his own bar, Papa Jules managing a chaotic situation Tiki style or Carlito mixing classic cocktails…well, I realise I am still in a learning process big time and only starting!”

With such a wealth of experience what are Padovani’s top tips for the novice bartender?

“Watch and learn, know your basics, listen to your elders and focus on the quality of the service you can give. Anyone can make a good drink simply following a good recipe but the service set you apart from the crowd! When you make it, stay grounded, don’t let your ego run away with itself: it’s called hospitality so care for your customers.”

Is it just me, or does Mr. Padovani sound like a fun kind of guy? Where would he go on his ideal night out, I wonder?

“The night will start early! I’d have Tea Time Martini at the Wolseley in London, prior to an aperitif in Edinburgh’s Bramble, followed by a quick libation in Melbourne Gin Palace to arrive for dinner in Paris’s L’ami Jean or Guilou Guilou. Then after diner drinks in Salvatore at Fifty, moving on to a big night out at in Moscow Simachev. Leaving the club for more drinks in the direction of New York’s PDT, before finishing the night in a lock in at the Paris Experimental Cocktail Club. That would be the ideal night out!”

Mine too! And whom would he spend it with?

A ‘Most Unusual’ lad’s night on the town, I may tag along. I think it’s safe to say Padovani’s work has taken him to some exotic locations?

“Yes, I have been to Girvan many times!”

Ice cold with a massive slice of cucumber!

And his classic gin cocktail?