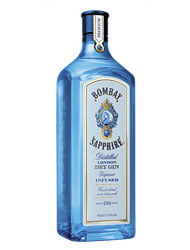 Bombay Sapphire is the gin that gently led the entire gin category out of its slump. Developed out of Bombay Dry Gin in the 1980s by Michel Roux of Carillon Importers, the driving force behind Absolut Vodka, it’s a sophisticated, premium spirit that has enticed a whole new generation to explore the delights of gin.

It not only tasted different it also looked very different in its stylish blue bottle and striking livery. The name “Sapphire” and the gem that adorns the logo were inspired by the 182-carat “Star of Bombay”” sapphire, discovered in Sri Lanka, and given to silent movie star Mary Pickford by her husband, Douglas Fairbanks Sr.

Even more importantly Bombay Sapphire was the first gin brand in modern times to actually talk about what’s inside the bottle and the flavours derived from specific botanicals. In the 1990s legendary bar guru Dick Bradsell used Bombay Sapphire as the base for a host of innovative gin drinks such as the Bramble inspiring a wave of interest in what had hitherto been seen as an old fashioned spirit. And the rest is history.

So what is inside the bottle? Bombay Sapphire’s recipe is based on 10 botanicals. They include traditional gin botanicals such as juniper berries, citrus, angelica and orris root. To these are added coriander, liquorice, cassia bark, almonds, cubeb berries and West African grains of paradise. And, although it is a London Dry gin Bombay Sapphire is made differently to most other London Dry style gins. A triple distilled, 100% neutral grain spirit is first poured into still, at the end of the lyne pipe at the very top of the still is a set of copper baskets into which the botanicals are carefully layered. The spirit becomes vapour as heat is applied and, as it travels upwards through the baskets, it extracts the oils of the botanicals within. On its journey back through the condenser it becomes liquid again. In the normal way feints and foreshots are removed and the spirit, now Bombay Sapphire gin, is collected in the spirit receiver. It is reduced to 40% ABV (47%ABV in the US) using pure water and finally bottled.

The advantage of this vapour infusion method is that it allows more volatile, delicate, floral flavours to be embedded in the spirit. Think of the difference between ‘steaming’ food and ‘boiling’ it. Certainly Bombay Sapphire is gentler than many other London Dry gins. On tasting it’s slightly sweet on the nose with delicate juniper, spice and citrus flavours following on. Fresh and clean with an elegant finish Bombay Sapphire is a barkeep’s dream with extraordinary versatility in long drinks and cocktails. Speciality Sapphire serves include the Aviation made with Crème de Violette and the Wet Martini where the extra vermouth enhance Sapphire’s floral and spice flavours, not to mention a truly great G and T.

For more delicious ideas on what to do with Bombay Sapphire have a look at the Gintime Cocktails selection.