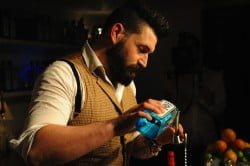 Richard Woods of Duck and Waffle has been crowned as the UK & Ireland winner of the Bombay Sapphire World’s Most Imaginative Bartender competition, which challenges the best burgeoning talents in bartending to create world class and imaginative cocktails. The UK & Ireland Final was held on 26th February at London’s Shoreditch House and was hosted by Bombay Sapphire.

Richard was selected from a total of 70 entries across the country, to take part in an all-day competition celebrating the power of imagination in the UK and Ireland’s cocktail community. A closely fought semi-final took place during the afternoon, in which fifteen bartenders produced two serves – a re-imagined twist on the Bombay Sapphire Ultimate Gin and Tonic and their own signature serve, an imaginative cocktail using the key ingredient, Bombay Sapphire gin.

All the contestants showcased their creations in front of a crowd and judges including last year’s UK winner, Joe Wild of Jenny’s Bar in Liverpool, chef Simon Rogan, who will be taking over the restaurant at Claridge’s this Spring, Global Brand Ambassador Raj Nagra and Bombay Sapphire UK Brand Ambassador Sean Ware.  The judges whittled the semi-finalists down to just five finalists.

The UK & Ireland finalists were:

The five finalists’ imaginations were put to the test with a culture challenge designed to embrace the traditions of one of the countries where the 10 Bombay Sapphire botanicals are grown. Richard impressed the judges with his winning serve named “The Royal Bounty” which was inspired by the spirit of China, where the Bombay Sapphire botanical liquorice originates from. The serve was to encapsulate the hidden botanical aroma representing the bounty, within the sealed box or treasure chest. The botanicals being the treasure and the chest would have held the ‘bounty’ paid as a reward, during the days of Queen Victoria’s empire. The box was layered with moss that had been scented with lemon essence, concealing a thin layer of dry ice. The box was then filled with the botanicals from Bombay Sapphire and with an almost closed lid, a cassia and liquorice smoke was pumped into the box. The lid was then sealed and presented to the judges. Upon opening the box the drinker is hit with the cinnamon and liquorice notes of the smoke and upon pouring a small amount of warm water over the ice, the aroma of the lemon scented moss followers through.

Richard’s re-imagined twist on the Bombay Sapphire Ultimate Gin and Tonic, named the English Garden Gin and Tonic and signature serve named The Cheese Course also demonstrated drinks worthy of crowning him the winner. The English Garden Gin and Tonic combined Bombay Sapphire compressed with garden peas and mint with tonic water, while The Cheese Course saw sweet and savoury flavours and different mouth feels combined to make an unusual and unique serve. This was presented with grapes which were injected with blue cheese infused oil, a finishing aspect to a presentation awash with imagination.

As the UK & Ireland winner of the World’s Most Imaginative Bartender, Richard will now have the chance to take over JubJub at London’s Callooh Callay in May with a one week pop-up bar. Offering a full menu of Bombay Sapphire cocktails, Richard will showcase his winning serves throughout the week, alongside working with UK Brand Ambassador Sean Ware, who will be hosting a series of consumer-facing Gin masterclasses.

Richard’s skill and imagination will also be rewarded as he progresses to the Global Final taking place in London in June, which will see him compete with 15 bartenders from across the world. During the prestigious Global Final, bartenders will receive the chance to visit the Bombay Sapphire Distillery at Laverstoke Mill and learn more about the unique history of the brand. All finalists will be encouraged to use these experiences as inspiration to create an imaginative cocktail with the ultimate goal of being crowned the World’s Most Imaginative Bartender 2014.

UK Brand Ambassador, Sean Ware, commented: “It has always been the ambition of the Bombay Sapphire brand team to create a platform that nurtures and develops the most promising talent from behind the bar and that is what the UK & Ireland Most Imaginative Bartender achieves. Throughout the competition process we look to inspire and educate bartenders from across the country and aim to support them on their journey to becoming the most imaginative bartenders in the world.”

Richard Woods commented: ‘I cannot wait to represent the UK in the Global Final of the World’s Most Imaginative especially with the final being hosted in London! I’m thrilled that the judges loved my cocktails as the competition was very tough and really stretched the competitors, there were really imaginative creations of a high standard. I’m really looking forward to experimenting further with flavours and imagination to create something worthy of the global final.’