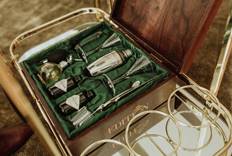 Here’s something a little bit different from our friends at Hendrick’s Gin who have teamed up with the talented hoteliers of the London EDITION to launching the diminutively TINI MARTINI TROLLEY. In a world where the beloved martini has been called everything from ‘the only American invention as perfect as a sonnet’ to ‘one of the happiest marriages on earth and one of the shortest lived’ – the Martini has been a symbol of both refined sophistication and wanton excess. Hendrick’s and The London EDITION are championing this king of drinks by initiating it to both the uninitiated as well as to tried-and-true martini connoisseurs the world over through the introduction of the Tini Martini. Guests staying in any of the eight suites at the luxury five-star hotel will be able to enjoy their very own TINI MARTINI TROLLEY – stacked with a medley of miniature trimmings, knick-knacks, garnishes, glassware as well as the world’s shortest odyssey – A Tale of Tini Proportions – which features a video tutorial on the process of making this most magnificent of tipples (along with a few curious surprises…).

The Tini Martini Trolley will be available across eight of the suites at The London EDITION from Tuesday 7th May 2019 until the foreseeable future.