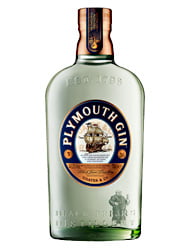 In the early nineteenth century Plymouth, London, Bristol, Warrington and Norwich were the great gin distilling centres each with their own unique gins. Gradually the London Dry style came to dominate but the gin made in Plymouth retained its own distinctively aromatic character. Plymouth Gin has remained true to this tradition. Produced in a still, which has not been changed for over 150 years, it has a subtle, full bodied flavour with no bitter botanicals.

Plymouth Gin has a long history. The Black Friars Distillery in Plymouth, where it is made, dates back to at least 1793 and there is reason to believe that distilling may have been carried out on these premises much earlier. Certainly Black Friars can rightly claim to be the oldest working distillery in the UK. The building is also reputed to have been the place where the Pilgrim Fathers gathered before they set off in the Mayflower for America in 1620.

Although Plymouth Gin is made in exactly the same way as London Gin, it is the only UK gin to have a geographic designation a bit like an appellation controllee – the result of a series of legal decisions in the 1880s when London distillers began producing a Plymouth gin. Coates & Co established then that, legally Plymouth Gin could only be made within Plymouth’s city walls.

One of the world’s great brands of gin, Plymouth Gin suffered years of neglect in the hands of the multinationals who often acquired Coates & Co as part of a job lot and never really appreciated the brand’s qualities and heritage. Plymouth is now happily ensconced in Chivas Brothers’ gin portfolio and is owned by giant Pernod Ricard.

A higher than usual proportion of root ingredients is the source of Plymouth’s distinctive earthy aromas. It has seven botanicals – juniper, coriander, sweet orange, cardamom, angelica and orris root that are redistilled with pure grain spirit. Elegant in the mouth with luscious marshmallow and hints of sage and eucalyptus it has a subtle, full bodied flavour with no bitter botanicals and not nearly as much of a juniper hit as some gins. Sweet orange and cardamom impart a softly fruity, spicy finish. Pure water from Dartmoor contributes to Plymouth Gin’s exceptionally clean and fresh flavour.