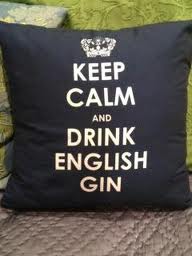 Although gin is now very much an international spirit produced and consumed all over the world, to my mind it still remains an English drink.  Partly that is because it has a rather English quirky and slightly schizophrenic nature. On the one hand gin is the basis for the world’s most sophisticated cocktails – the Dry Martini, the Negroni, the White Lady – the list goes on. On the other hand, the very word still has negative connotations – think ‘mother’s ruin’, ‘gin-sodden’ or ‘gin-mill’.

Gin is also English because, like Woody Allen’s Zelig, it has played a supporting role in the great events of British history. One of the most immediate effects of the Glorious Revolution of 1688 when the Dutch King William ascended the British throne was the introduction of new laws to promote home grown distilling from ‘good English corn’. That led directly to the English becoming a nation of spirits drinkers and the somewhat predictable madness of the eighteenth century Gin Craze.

In the nineteenth century as gin began its inexorable upward rise we find it popping up as a catalyst of wider social change. In the Regency era London became the biggest and busiest city in the world. It was a time of great social and political upheaval and whilst in Jane Austen’s world the social hierarchy was rigidly defined there was another London and gin drinking was at the heart of it. Published in 1821 “The Real Life of London” The Rambles and Adventures of Bob Tallyho, Esq. and His Cousin, the Hon. Tom Dashall, through the Metropolis….” has a marvellous description of gin drinking in the various strata of London society. At this time gin had many nicknames – daffy, blue ruin, Old Tom, max, flash of lightning and jackey and Tom Dashall talks about them all.

“Daffy’s Elixir,” replied Dashall, “was a celebrated quack medicine, formerly sold by a celebrated Doctor of that name, and recommended by him as a cure for all diseases incident to the human frame. Gin, Old Tom, and Blue Ruin, are equally recommended in the present day; in consequence of which, some of the learned gentlemen of the sporting’ world have given it the title of Daffy’s, though this excellent beverage is known by many other names.

Daffy was drunk by the toffs whilst “the Lady of refined sentiments and delicate nerves, feels the necessity of a little cordial refreshment, to brighten the one and enliven the other, and therefore takes it on the sly, under the polite appellation of white wine”. Further down the social scale characters like the Laundress took a drop of Old Tom and the painter mixed his white with a dram of Blue Ruin. Dashall’s conclusion is that “it may fairly be presumed it is a universal beverage-.”

And we find the poet Byron, the first modern celebrity and probably one of the most famous characters of Regency London giving fellow author Thomas Medwin the following advice on how to become a poet:

“Why don’t you drink, Medwin? Gin-and-water is the source of all my inspiration. If you were to drink as much as I do, you would write as good verses: depend on it, it is the true Hippocrene.” (The Hippocrene is a fountain sacred to the muses that was supposed to inspire poetry.)

English gin played a less inspiring role as a crucial element of the infamous ‘triangular trade’ when English ships took goods to West Africa, exchanged them for slaves which they transported to the Caribbean and the Americas and there loaded up with sugar and tobacco which they brought back home.  In parts of West Africa strong spirits are to this day known as gin and old stone gin bottles are regularly dug up on deserted beaches.

Gin encapsulates the outward looking nature of the English indeed the British. Not so much “a nation of shopkeepers” in Napoleon’s scathing phrase more a nation of adventurous traders who roamed the world and founded the biggest colonial empire the world has ever seen. Even gin’s exotic ingredients are a reminder of a historical golden age when the ships of the mighty East India Company arrived home laden with all manner of spices and herbs from the corners of the globe where our merchants traded for over four hundred years. And let’s not forget that the British Empire, where the sun never set, gave us the Gin and Tonic, the most perfect mixed drink ever, apart from possibly the Cuba Libre.

During the dark days of Prohibition when America declared war on alcohol, somewhat perversely the reputation of English gin soared. In 1924 over 4,000 people died from the effects of drinking bad alcohol and people began to be prepared to pay whatever it cost for quality spirits. Throughout Prohibition, London distilleries exported around 40 million dollars worth of gin to the US via Canada, the West Indies and tiny islands just off America’s eastern seaboard. The famous Captain William S. McCoy, a bootlegger who was known for selling only the best liquor, may have delivered some of these consignments. Because of this, some accounts place McCoy as the source of the term “the Real McCoy.” By the end of Prohibition “English” and “gin” had become inseparable synonyms for quality like French brandy or Russian caviar.

English gin has always had important fans: Charles Dickens, Mrs. Isabella Beeton, Arthur Rimbaud, F. Scott Fitzgerald (who drank it because he believed it couldn’t be smelt on his breath), Noel Coward, the Bright Young Things, the literati of the Algonquin Round Table, the Hollywood Rat Pack, Kingsley Amis, James Bond creator Ian Fleming and even Oasis who sang:

I need to be myself

I can’t be no one else

Give me gin and tonic

And who can possibly tell if the outcome of War World War 11 wasn’t affected by Winston’s Churchill’s favourite tipple – a Plymouth Gin Martini or more properly a glass of neat gin raised by the man himself in the direction of the Channel in memory of French vermouth then unavailable. A drink to inspire heroism if ever there was one.

And when the annals of the Great Cocktail Revival of the 1990s come to be written it will be recorded that it was London bartenders who spearheaded the cocktail renaissance and, along the way, put gin firmly back where it belongs.

But ultimately the reason why gin remains English is quite simple: English gin tastes better. And by that I really mean UK produced gin given the geographical nature of the UK drinks industry. I taste endless amounts of new gin arrivals – from France, Spain, New Zealand, the US, Sweden you name it.  Many of them are excellent gins but if I were forced to choose from them only the gins I would buy for myself they would all be British gins. There is something honest about them and it’s not just that many UK gins, notably Plymouth and Beefeater, have an unparalleled heritage. It’s more about an integrity of provenance that translates into a distinctively big hearted character. But then again I wouldn’t want a Rolls Royce that has been made in South Korea.