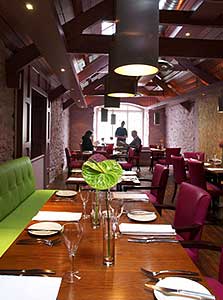 Plymouth Gin is one of the oldest and most revered gin brands in the world. Indeed it is the only one still made at its original distillery at Black Friars in the medieval heart of Plymouth. By law, Plymouth Gin must be made within the city wall of Plymouth. But, being firmly rooted in its place of origin has never stopped Plymouth Gin travelling the world.

Plymouth’s export trade was jumpstarted over 250 years ago by the Royal Navy. William III, in whose reign gin became part of British drinking culture, founded the Naval Dockyard at Devonport in 1691. Ever since Plymouth has been an official Royal Navy base. Around the time of the Napoleonic Wars, naval officers developed a taste for gin and by 1850 the Royal Navy were buying over 1000 barrels of super strength 57% abv Plymouth Gin a year.

Whenever a Royal Navy ship entered port, a green and white flag was hoisted as an invitation to other ships’ officers to ‘come aboard for a drink.’ This flag soon became known throughout the Fleet as the Gin Pennant. It still is.

Where the Navy went, demand for Plymouth Gin soared, and since this was the time when the British Empire dominated almost every corner of the known world, Navy ships took the taste for Plymouth Gin everywhere. Strangely, in China during Victorian times Plymouth Gin was known as “Jossman” because the Plymouth monk bore a striking resemblance to the Chinese figure of good luck and in the Shanghai Club only one man, who was a QC. (Queen’s Counsel) ever ordered gin. Later, anyone wanting a gin would ask for “what the QC drinks” hence all gins became known as QC and Plymouth as Jossman QC.

By 1900, Plymouth Gin had the biggest export market of any UK-produced gin and was sold in over 50 countries throughout the world. Company records show that over 1000 cases a week were dispatched to New York alone – the home of the Martini. In the Twenties and Thirties, despite Prohibition in America, Plymouth Gin maintained its massive export trade. It was only during the Second World War and its aftermath that exports began to dwindle because of supply problems.

Plymouth Gin virtually lost its export sales during the dark days when it was passed around between multinational drinks portfolios. But now, with serious marketing support from Swedish giant Vin & Sprit, Plymouth Gin is out and about again. In 2002 PG set its sights on the US market, the largest branded gin market in the world and launched its first advertising for decades. Plymouth Gin has now grown significantly in Canada, Australia, the Far East, Northern and Southern Europe and worldwide Duty Free outlets. So Plymouth is back where it should be – travelling the world in style.

At the same time, V&S support has enabled Plymouth to launch a very exciting venture at home. That is the transformation of the Black Friars Distillery into a truly amazing visitor attraction with guided tours of the historic building, in depth information on the history of Plymouth Gin, tastes of the Plymouth Gin range as well as Private Tasting Master Classes. There’s also a new café and deli and a Distillery Shop stocking the full Plymouth range and other goodies. At the heart of the Distillery experience is a strikingly modern cocktail bar housed in the medieval hall of the Black Friars building. The Refectory is open to the public during the day and a members’ bar in the evening with a fantastic cocktail man featuring the famous Plymouth Gin Magnificent Seven range of cocktails. The Refectory also hosts special cocktail making master classes and Sunday Jazz sessions with top performers on the first Sunday of every month.