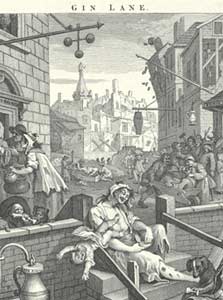 By the beginning of the eighteenth century deregulation of the English distilling industry meant that vast quantities of cheap gin were readily available and, for the first time, the English became a nation where spirits were widely drunk. The urban poor of London took to gin like ducks to water. And, although gin was equally drunk by both sexes, it developed a strong female association. Hence, gin was known affectionately as Madam Geneva or Mother Gin whilst later nicknames included “Ladies Delight”.

The social effect on London’s population, particularly on working class family life, was dramatic. Hogarth’s ‘Gin Lane’ sums it up. Here the most powerful image is that of the drunken mother in the foreground her child falling unnoticed from her arms.

Numerous pamphlets and magazine articles denounced gin as the ruin of family life in much the same way that 20th century reformers pointed to drug addiction as the main cause of inner city social problems. The demand for reform became unstoppable.

Attempts began to be made to control the gin madness. They were well meant but ill conceived. Most surprising of all was the decree that only dwelling houses could sell ‘intoxicating liquors’. It had predictable consequences. The Act of 1736 caused the most outrage as it attempted to fix a licence fee of £50 for gin retailers, prohibited the sale of gin in quantities under 2 gallons and taxed gin at £1 per gallon.

This Act made Madam Gin the It Girl of summer 1736, inspiring poetry and pamphlets and even a long running theatre show – The Deposing and Death of Queen Gin with the ruin of the Duke of Rum, Marquee de Nantz and the Lord Sugarcane written by Henry Fielding. Below the Duke of Rum tells us how the people reacted to the news that Queen Gin was to be exiled:

Rum: “By different ways their discontent appears:
Some murmur, some lament, some loudly roar,
This day in pomp she takes her leave of all:
Already she has made the tour of Smithfield,
Rag-Fair, Whitechapel and the Clare market: Now
To broad St. Giles she directs her steps.”

The play ended with a mob of ragged men and women shouting “Liberty, property and Gin for ever”.

On the actual night before the Act became law there was a night of extreme Gin Madness. Mock funeral processions took place all over the country with people carrying effigies of Madam Geneva. In London, taverns painted their punch bowls and signage black and an official funeral for Mother Gin took place in Swallow Street, just off Piccadilly. The next day dawned on one of the biggest collective hangovers the world has ever known.

Over the next thirty years proper regulation and control of the distilling industry and the introduction of significant duties taxed cheap gin out of existence. Gin’s negative image is long gone and nowadays gin madness is just our way of celebrating spring.