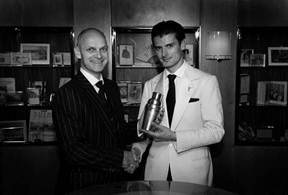 Plymouth Gin marked the 50th anniversary of Harry Craddock’s death on Friday 25th January with an original journey through the landmark locations that were touched by his presence. Celebrating one of history’s greatest mixologists, the event provided guests with a unique insight into the life and work of the legendary bartender of the 1920’s and 30’s. The tour included an impromptu memorial service at Craddock’s newly re-discovered grave, visits to a number of illustrious London bars, including The American Bar at The Savoy and The Dorchester; and the installation of a cocktail ‘time capsule’ at the Savoy Museum, the contents of which will be revealed when it is opened in 50 years’ time.

Anistatia Miller commented: “It has been an honour to share what I have learned during seven years of research about Harry Craddock’s personal life and the impact he had on the bartending profession during the 1920’s and 1930’s. Plymouth Gin’s celebration of Craddock’s life and work has been the perfect way to mark this special anniversary.”

Originally a mixologist in the United States, Craddock travelled to London during the Prohibition era where he was employed as Head Bartender at The American Bar at The Savoy Hotel from 1923, before moving to become Head Bartender at The Dorchester in 1933. During this period he championed the Dry Martini, popularising the now legendary cocktail, and invented a number of celebrated classic recipes, including the White Lady and the Corpse Reviver 2. Craddock marked his success by secretly burying cocktail shakers filled with his most famous cocktails in the walls of both The Savoy and The Dorchester.

Today, Harry Craddock is best remembered for compiling The Savoy Cocktail Book, a seminal cocktail guide which chronicled the close of the Golden Era of Cocktails in America and the dawn of the European Cocktail Age in over 1,000 recipes. Within its pages, Plymouth Gin makes more appearances than any other brand, including its listing as the preferred gin for the signature Dry Martini. 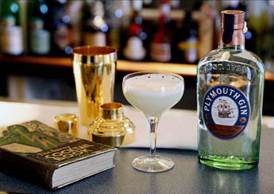 Master Distiller of Plymouth Gin, Sean Harrison, commented: “Plymouth gin has always been respected by leading bartenders around the world; the unsurpassed heritage and continuous recognition by esteemed cocktail books, especially The Savoy Cocktail Book, have inscribed Plymouth gin in the annals of cocktail history. I am very proud to celebrate the life and work of Mr Harry Craddock: both a true gentleman and world-class Bartender, who discovered the merits of Plymouth Gin for himself.”