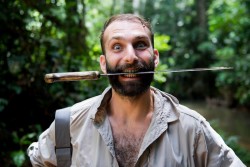 This week Gintime caught up with David Piper, Hendrick’s Global Ambassador Plenipotentiary whose special role as “Commander of Special Operations” means he is the chap in charge of the Hendrick’s fun.

How exactly does one become Hendrick’s “Commander of Special Operations”?

That is a long story, which could be told in many ways. None of them would make much sense. I’ve got lots of gin in my blood – my father worked for a couple of rather well-known gin brands (there may even be one or two left in the industry who remember him). I have flitted from art to parties, writing, performing, building nonsense machines and mobile peepshows, and voice work, via a little bartending, but encountered Hendrick’s in 2003, and managed to build a ridiculous relationship with the brand, and many of its luminaries, mainly centred around activities like inventing steam-powered cocktail shakers, etc… They asked me to join full-time in 2011, and didn’t really know exactly what for, so I made that title a condition of accepting the job.

Where’s the best place you’ve ever been on your Global Ambassador travels?

Kanaracuni, the village in the middle of the Venezuelan jungle, where Lesley Gracie (our Master Distiller and brave adventuress!) and I stayed for 10 days, with explorer Charles Brewer-Carias and the Indians taking us around the forest, looking for the botanicals they use for magic and medicine. I think of it often, and wish I could have stayed longer. The expedition was primarily focused on taste and scent, of course – but it’s fair to say that all 7 of our senses were extremely alive there.

Has anything really dangerous ever happened?

Charles is the 77 year-old living embodiment of the Gentlemen explorers of yore, a veteran of countless hundreds of expeditions, discoverer of scores of new species, peoples, geological formations, a hero in Venezuela, a very learned and strong-willed man… and a wind-up artist, who took great glee, before the trip, in warning us of the (very real) dangers of the jungle. Vampire bats (we saw some, but they stayed away), panthers, terrifying poisonous ants, and mysterious spirits all loomed dark and large in his lurid tales. But it was as we were pulling away in our canoes from the village of another tribe, who are far more primitive than the Yekwaana, with whom we stayed, after an argument in a language we couldn’t understand, that we looked back and saw 5 men on the ridge, pointing their bows and arrows at us, and realised how close we had come to staying in the jungle for ever…

Tell us why you think Hendrick’s is on such a roll?

Taste. We are immensely proud of our gin, our tiny ancient stills, and Lesley’s prowess – you don’t often hear these words together but I think it has exquisite balance. It’s complex and sophisticated, and I think it still surprises people – it was one of the first, and is still one of the only, gins to really explore the spirit’s subtlety in such a pleasing way.

Without that, we’d be nothing and nowhere – but we also know how to have fun. And boy, we do…! Gin is interesting, drinking is interesting, the world is interesting, and what’s more, they can all be made even more so. We like to surprise and delight, and see people enjoy themselves, and we like to find the weirdest and most wonderful ways to help them do that. We try to blow the tastebuds, minds, and hearts of the bartenders who pour Hendrick’s and the tipplers who sup it.

Of all the bars in all the world which one would you choose and what would you drink?

The American Bar at The Savoy, in the early 30’s, with an Alaska. If I’m not allowed to time travel, then it’s a very hard choice – there are so many amazing bars these days. Canon, in Seattle, might come close, Happiness Forgets in London and ECC in Paris will forever be etched onto my heart, but I’ll plump for Nottingham Forest in Milan, which is its own little world of comfort and awe. I’d drink whatever brilliantly twisted, hilarious and delicious invention Dario Comini might choose to make – last time it was a “Dexter” cocktail, which involved a silicone glove, a surgical scalpel, and a membrane to cut to let salty red liquid drip into your drink…

Who are your literary heroes?

If you could choose another period of history to live in which would it be?

At the moment I’m rather obsessed by the medieval era – heraldry, tournaments, Holy Grails, etc. And the Celts at their civilized peak. And the Aztecs. Though also early 17th Century London, which had a lovely movement of nonsense poetry, as well as an explosion in ‘clubs’, groups of people of like mind meeting in rooms above pubs. Murderers’ clubs, meat-eaters’ clubs, liars’ clubs…

Favourite food in the world?

Bellota ham, in Spain, the thought of which is making typing this very difficult

It’s the end of the world tomorrow how would you spend your last day?

Probably the one thing I’d really want to do is see the world from space. But – hold on, you only said end of the ‘world’, right, not universe or galaxy, so that might give me a little bit more time to leave open the possibility of rescue by some benign aliens. Even more time if I took enough Bellota ham. The first ham in space.