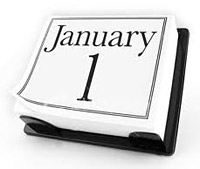 You count down the bells, sip the cocktails and welcome in the New Year with a smooch, but do you know the history behind Hogmanay? We do! Here’s the lowdown on the celebration of the year.

New Year occurs on the 1st of January because that’s the day Julius Caesar established it in his Julian calendar. It’s thought he named it after himself simply because he could. Of course, we now use the Gregorian calendar introduced by Pope Gregory Xiii. Yeah, it was all ‘me, me, me’ with those Caesars and Popes.

The Twelve Days of Christmas were originally called the Daft Days in Scotland. The Scots writer J M Barrie described it in his book Auld Licht Idylls of 1888 as “the black week of glum debauch that ushered in the year”. The Daft Days were a celebration of gluttony and merry making that lasted a whole twelve days and not much has changed really.

The Babylonians nearly did as well as the Scots at New Year: they celebrated for 11 days and not one of those involved going to Marks and Sparks for the January sales.

Hogmanay celebrations in Scotland often revolve around fire. In Dundee they burn the clavie, a bonfire of casks; in Stonehaven fireball swinging is enjoyed; the Saining, a Highland custom, involves the burning of juniper and in Edinburgh they have a torchlight procession on the night afore and round the whole thing off by burning a Viking long ship.

In England the custom of first footing is also important. The first person to enter your house at the beginning of the year should be young, male, healthy and handsome. Not asking much, are they? The hottie also should be dark haired and bearing gifts of coal, money, bread and salt. What, no herring?

Hogmanay celebrations usually end with all present singing Auld Lang Syne, a song by Robert Burns. As dictated in the second verse everyone links arms. Burn’s being fond of the bevy himself, no doubt wrote this to help everyone hold each other up.

The Presbyterian Church in Scotland wasn’t too keen on Hogmanay, possibly because it involved having fun. It wasn’t mad about Christmas either and even in the mid 20th century many Scottish households didn’t celebrate Christmas at all. It was English cultural values that made Christmas popular in Scotland, something the Scots seem to have forgotten to thank their neighbours for.