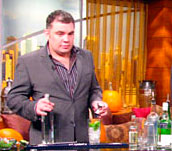 Jake Burger tells Gintime all about his new baby – the Portobello Star (Gintime’s current Bar of the Month) and his life in the biz.

I’m really happy with the cocktail list at the Star and think it’s the best one I’ve ever done. The look, images and typefaces are mostly lifted from the Jerry Thomas Bartenders Guide from 1884. The drinks are a good mix: a few of my own creations, a few modern ones, which I think have the legs to become classics. There’s also a whole load of classics that I love, not just the same old ones we all love, though they are there too, but a few less familiar ones like the Gin Alexander which has been in the shadow of its brandy based sibling for far too long.

Leelex has four bar ventures under our belts now, and an interest in a record label, so it’s important to have good trusted people in all our key positions. My business partners Ged and Paul are in Leeds most of the time, so they can keep an eye on Oporto, Jake’s and Angels’ Share. Also all our managers are people who have come up through the ranks over the years so we trust them and they have a good understanding of the ethos of both the company and the characters of the individual bars.

We’ve won a few awards and everybody likes it when their hard work is appreciated, I guess. Also it helps with getting press exposure, especially locally, which can certainly have an impact on levels of business.

I switched from the wash-up to the bar the day after my 18th birthday. It was the only bar in Leeds which served cocktails at the time and being in what I call The Dark Age of The Cocktail most of the drinks were pretty lousy. But it still seemed glamorous and seduced me. I started acquiring books, recipes and menus and it all kind of carried on from there.

I’m pretty much self-taught. I had people who inspired me like Dick Bradsell, Ben Reed and the boys at Lab, when that first opened, but mostly I worked it out or looked it up. Apparently my pour is all wrong ‘technically’, probably because no one ever showed me how!

To create a new recipe I start by tasting the spirit I’m going to use on its own and then work from there. I always try and find flavours, which compliment the existing flavours rather than disguising them with an overdose of exotic fruit puree or syrup. The older I get the more my drinks resemble the classics of old. I use small amounts of Vermouth, Orange flower water, egg white, lemon juice, etc. Nothing too flash for me these days…

At the Portobello Star we get a real mix, as you’d expect in Notting Hill. Some of the eccentric old regulars from the old Star still come to visit which adds a bit of character. We get a lot of people from the drinks industry in, be it bartenders, reps, ambassadors or operators, which I always think is very flattering. When our peer group chooses to hang out at the bar it means we must be getting something right! Then we have all our local regulars and a fairly young media and PR crowd. On market days we’re inundated with tourists.

Over the years I’ve acquired a few examples of antique cocktail bitters, which have long since been out of production. The Bokers is the one that gets the most attention. Produced in NYC between around 1880 and 1903/4 it was the bitters that Professor Jerry Thomas prescribed in his version of The Manhattan, which was the first published recipe for this drink. There’s a chap in Germany who has a bottle but apart from that I don’t know of any others, certainly not in bars, anyway. I’m also working with Bob from Bob’s Bitters to recreate one of the other lost bitters brands: Abbotts, which disappeared in the 1950’s. Using my original sample and a recipe that Bob stumbled across we are in the process of reviving this most wonderful product. It should be ready in the summer.

With the economic downturn I think people will drink conservatively and return to the drinks they know they like. They may become a little less adventurous, which isn’t such a bad thing for us bartenders, really. The chance to revisit the classics never goes amiss.

We all have to be aware of responsible drinking in the industry these days, not just because of the scrutiny from the powers that be, but also because we do have a responsibility to society to help people drink intelligently and to limit the harm done by alcohol. This has always been part of the bartender’s craft and has perhaps been neglected in recent times. We enjoy a few shots of Jagermeister as much as the next place (more than the next place on occasion!) but why not accompany it with a well-made drink you can savour rather than 5 pints of cheap lager?

There are pockets of the UK with wonderful bar scenes. Obviously I would mention Leeds, although the bars there are not all about great design, or shiny impeccable service, they’re about having a great time and enjoying a well-made drink. Up in Edinburgh the standards of bartending are as good as anywhere you could mention and the bars are beautifully designed and fitted out. It only takes a small band of dedicated people in a city to kick-start a bar revolution and that can snowball. I think the regions are in good shape and I’m optimistic about the future of the industry and the bartending craft throughout the UK.

The best UK bars are as good as any in the world. Our bartenders are knowledgeable and efficient, our bars are frequently beautiful and we get the atmosphere just right. Of course we have some terrible bars serving multicoloured shots in test tubes but so does the rest of the world. Perhaps over the years our cocktails became too complicated but I think the tide has turned. I see less muddled kumquats these days.

It’s an exciting time for gin. I have old fashioned tastes so like a more traditional style of gin, one where you can taste the Juniper. I’m not really down with the overly fragrant, overly sweet modern gins. The new London Dry from Haymans is very good, a classic benchmark London Dry. I’m impressed by the elegance of Beefeater 24 and I think Hendricks continue to do great work in bringing people to the category. In cocktails Gin had rightfully returned to the top of the tree and the ghost of vodka skulks off into the shadows. Long may it last!

My first piece of advice to anyone wanting to be a mixologist would be: don’t be like me! Find a mentor, study hard and practise, but the main thing I try and teach my protégés is, to enjoy it. It’s all well and good learning everything inside out and knowing more about Mirabelle Liqueur than anyone else on Earth, but remember it’s meant to be fun! If you have fun, so will your guests.

My tips for those who want to make great cocktails at home are to buy some decent equipment, learn the classics and don’t feel the need to have every bottle: that’s too expensive. Buy some decent Gin, American whisky and rum, a good Vermouth (keep it in the fridge) some bitters and perhaps some triple sec and Maraschino. Then you’ve got enough options to keep you going for years. Oh and try and ignore the guys on Youtube telling you how to make drinks! There may be some good videos but the ones I’ve seen are terrible, try searching ‘Woodford Reserve Mint Julep’. Their guys at the distillery would have a nervous breakdown if they saw that one.

I’m not really into clubs these days. I like a place where I can sit at the bar and enjoy a cocktail: somewhere I don’t have to leave till I’m ready to leave. My ideal night out would begin with a nice Italian meal first, with a handful of like-minded friends, then we’d stay up drinking French 75s till about 6am.

The next venture for Leelex is our new place in Leeds just next door to Jake’s and Oporto. I keep getting told off for calling it a Tequila bar, as it’s definitely not that! It will, however, sell lots of Tequila. I’m looking forward to putting the collection together for that one. Then, who knows? Jake’s Bar Hawaii? Someday….

In London Quo Vadis is really excellent: great drinks and fantastic staff. In New York Death and Co is wonderful and Clover Club alongside The Flatiron Lounge are really setting the standard. I visited Paris with Hendricks Gin a couple of weeks ago for their Curling Competition and thought Curio Parlour was really good. The place looks great: stuffed animals everywhere and Emily made some great drinks. In Leeds I always enjoy a glass of champagne at Epernay.

Hendricks and Fever Tree with a grapefruit twist.

At the moment I’m enjoying a French 75, made Harry’s Bar style, with a little float of Ricard:

Shake 25mls Beefeater, 12.5mls lemon juice, 10 mls Gomme Syrup over ice. Strain into a flute, top with Champagne, then float about 5mls Ricard on top. Garnish with a cherry and a lemon spiral. C’est parfait, non?