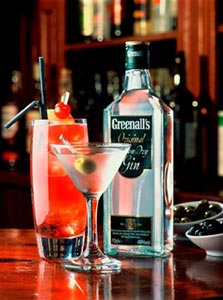 Almost every bottle of gin carries the description ‘London Dry’ and an astonishing fact in the history of the relationship between London and gin is that by 1790 London was producing 90% of English gin.

A trade directory of 1794 for the Cities of London and Westminster and the Borough of Southwark lists over 40 distillers, malt distillers and rectifiers for the area. But at the same time gin was distilled on a smaller scale in other towns and cities particularly those with large ports and connections to the Navy like Bristol and Plymouth. And strangely, because it was not a port, gin was distilled in Warrington in the North of England where Thomas Dakin, the original founder of the company that became Greenalls Gin, set up his distillery in Bridge Street in 1761.

Why are some companies still in unbroken existence after over 200 years and others not? Often because a successful enterprise in the 18th century depended on the exact same factors that make for business success today – a ready customer base, quality products and an efficient distribution network. Thomas Dakin’s distillery thrived because he had a big local market for his products. Late eighteenth century Warrington was a transport hub and the main business of Bridge Street was travel. Coaches from London to Preston passed through Warrington and, having crossed the Mersey at the bridge, stopped at the inns of Bridge St to change horses, pick up travellers and give passengers an opportunity to eat and drink. Passengers from Liverpool travelled down the Mersey by boat and joined the London coach at Warrington bringing even more custom to the town. Pre the Industrial Revolution the river was crucial to the success of Warrington and its most prosperous industry was the manufacture of sailcloth, called poldavy, for merchant ships and the Royal Navy. There were plenty of sailors in Warrington and many more who earned their living from the sea and the river.

Travellers, sailors and water workers were the first to appreciate Thomas Dakin’s gin and they were soon followed by local people, eager to copy London fashion, as well as doctors and apothecaries who recommended gin and distilled cordials for colds and indigestion.

Dakin’s gin was far removed from the rough concoctions sold in the gin shops of London. Right from the start it was a quality product. Thomas and his wife Margaret also ran a wine and spirit shop in Bridge St and it is clear from the original account books that this was a busy concern which supplied a range of drinks including ‘fine gin, Maidstone gin and Hollands’ (a jenever type gin) to a widespread clientele throughout the North of England.

Dakin’s son, Edward was a founding member in 1788 of the Amicable Club, a small group of wealthy, intellectual, like-minded men who met on a weekly basis to socialise and inevitably, to do business with each other. It is through the Amicable Club that the Greenall family, who had begun to brew beer in St Helens in 1762 and had established a brewery in Warrington, met the Dakin family. In 1860, as the market for Dakin’s Warrington gin remained strong, Edward Greenall leased the Dakin distillery and, in 1870, he bought the distillery outright. With this acquisition, the Greenall family acquired a famous brand and an established distribution network.

The Victorian passion for gin was shared by Warrington people and the 1876 stock list for what was now known as G and J Greenalls showed that only sherry outsold gin. Cordials – raspberry, ginger and mint – were also well stocked perhaps as alternatives to alcohol or as mixers for the new fangled cocktails recently introduced by American travellers.

By the early part of the twentieth century, Greenall’s was supplying hundreds of local public houses, inns and hotels with its wines and spirits. The distillery continued to produce gin for the national and international market and by the 1920’s more than half the spirits sold were bought for home consumption. Growth stopped abruptly in the Second World War, when the production of gin was halted and did not resume until the 1950’s. The increasing prosperity of the country brought new markets for G&J Greenall, particularly amongst women and the younger adults

By the mid-1960’s the original Bridge Street distillery was too small to cope with demand and a new, larger modern distillery was built nearby. The new distillery contained stills of the same specification to those originally installed to make the original Warrington gin,
whilst at the same time allowing for a broader range of drinks to be produced on a contract basis. In the 6 years between 1975 and 1981, G&J Greenall company turnover grew from £17.7 million to £42.2 million due to the tremendous success of Greenall’s London Dry Gin and
Vladivar Vodka both in the national and overseas markets. The spread of supermarket sales helped make these products into household brand names and increasing air travel also played a large part in the Greenall’s market with duty free sales contributing significantly.

Bombay Sapphire is made at the Greenall’s Distillery alongside the company’s own gins, Greenall’s Original and Q. Indeed G&J Greenall produce 30% of all Gin and Vodka consumed in the UK and was one of the first UK drinks businesses to exploit the potential of the Russian
market. But no matter how much Greenall’s has grown the roots of its prosperity can be directly traced back to the business practices of its canny founder, Thomas Dakin, the distiller who dared to make gin in
Warrington.