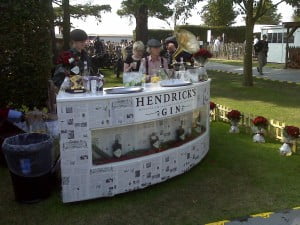 The Goodwood Revival celebrates the romance of motor racing as it used to be and the lovingly restored Goodwood Motor Circuit is the only sporting event in the world set entirely to a period theme. As well as old style car races, there was entertainment in the form of actors playing out scenes from a bygone era – Spivs selling nylons and watches from beneath their coats; Mods and Rockers hanging out and then being ‘moved on’ by the local bobbies; joke workmen preparing to dig a hole in the most inappropriate places; iconic figures such as ‘Marilyn Monroe’ and even the Dad’s Army home guard. Visitors looking to rest their weary feet sought refuge on the Brooklands Lawn over a deliciously refreshing Hendrick’s Gin and Tonic served over ice with a slice of cucumber. The delightfully peculiar team from Hendrick’s were also on hand with their penny-farthings and croquet lawn for those brave enough to take part!