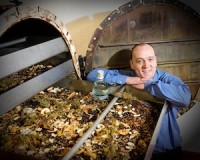 Since its launch in August 2009, Caorunn, the small batch distilled Scottish gin has established itself as a spirit of exceptional quality. It’s already the third bestselling super premium gin in the UK and the brand has also launched in seven of the top eight premium gin markets internationally – the US, UK, Spain, Italy, Greece, Australia and Germany.

The signing of a deal with Australia’s largest drinks distributor, Suntory, manes that Caorunn will now be able to grab a bigger share of the global premium gin market. With listings in Sainsbury’s Scotland, Harvey Nichols and 350 top end bars throughout the UK, Caorunn has seen a volume increase of 212% in the first 6 months of 2011 versus 2010. The brand has also sold three times more than its nearest competitor across the Scottish travel retail sector this summer. This remarkable increase in volume is matched by a string of industry quality awards the latest being gold medal wins at both this year’s Gin Masters and Monde Selection Awards. Caorunn has also made its mark across the Atlantic, being awarded a gold medal by the prestigious US Beverage Tasting Institute. So onwards and upwards for Carounn.