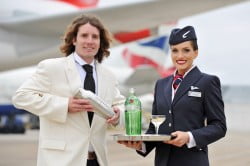 James Fowler from the Larder House Bar in Bournemouth, has been crowned the World Class UK Bartender Of The Year 2014, following a landmark week of intense competition. He was announced the winner on board British Airways flight BA26 from Hong Kong as the UK finalists returned from the competition on Sunday 1st June.

The World Class UK Final is one of the most difficult of cocktail challenges  and comprised challenges spread across two countries. These ranged from the ‘East Meets West’ challenge held at 35,000 feet on board a British Airways A380 flight to Hong Kong, to a chef’s challenge set by Jason Atherton in Hong Kong.

Over the past ten months, contenders from the most esteemed bars around the world have competed in local and regional heats, each aspiring to attain a coveted place at the World Class UK Final. Fowler will now go onto represent his country in the Global Final in July. Held on home ground this year at luxury locations across Scotland and London, participants from over 50 countries will showcase their creations in front of some of the most revered names in the industry. Past judges have included Salvatore Calabrese, Peter Dorelli and Dale DeGroff.

World Class UK Bartender of the Year 2014, James Fowler, said: “I’m overwhelmed to be crowned World Class UK Bartender of the Year 2014 and delighted to know that my winning cocktail will be served to First Class customers on British Airways flights.
It’s an honour to have been on this journey with so many talented bartenders. The unique challenges we faced throughout the final have tested our creativity, knowledge and skill and really pushed us to our limits. I can’t wait to compete against the world’s best bartenders on home turf when the World Class Global Final arrives in the UK in July.”