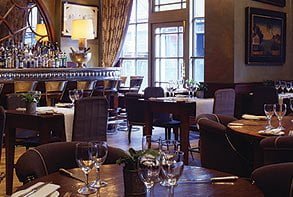 In the heart of theatreland and mere footsteps from Seven Dials, lies the grand dame of hotel bars. Sweeping into Brasserie Max is like stepping into a period drama – the prim, straight-backed chairs are neatly set around little tables, and the highly polished bar looks like it should be lined by flappers instead of businessmen and pre-theatre revelers. During busy times, drinkers are confined to the bar stools as the cluttered room fills up with diners eager to sample the Modern British cuisine. It smells divine, but personally we’re more interested in the faultlessly posh wines, champagnes and cocktails served by attentive bar staff keen to hear your approval. It’s probably not the done thing to suck the coconut ice cream off your cinnamon stick, but sometimes you have to go with these urges.