The debate on the etymology of the cocktail rages still with drinks historians undecided as to the definitive answer to the word’s origin. We found a charming piece by the great American humourist and author 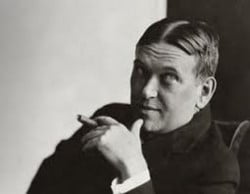 HL Mencken, which somehow seems to have more plausibility than most.

From The Vocabulary of The Drinking Chamber

“I have in my archives perhaps forty or fifty such etymologies for cocktail, but can only report sadly that all of them are no more than baloney. The most plausible that I have encountered was launched upon humanity by Stanley Clisby Arthur, author of “Famous New Orleans Drinks and How to Mix Them”, a classical work. It is to the effect that the cocktails was invented, along about 1800, by Antoine Amedee Peychaud, a refugee from Santo Domingo who operated a New Orleans pharmacy in the Rue Royale. This Peychaud was a Freemason, and his brethren in the craft took to dropping in at his drugstore after their lodge meetings. A hospitable fellow, he regaled them with a toddy made of French brandy, sugar, water, and a bitters of a secret formula, brought from Santo Domingo. Apparently running short of toddy glasses, he served this mixture in double ended eggcups, called, in French “coquetiers”. The true pronunciation of the word was something on the order of “ko-kayt-yay” but his American friends soon mangled it to “cock-tay” and then to cocktail. The composition of the bitters he used remained secret, and they are known as Peychaud’s to this day. His brandy came from the Sazerac du Forge et Fils distillery at Limoges, and its name survives in the Sazerac cocktail, though this powerful drug is is now usually made of rye whiskey, with the addition of Peychaud’s bitters, absinthe, lemon peel, and sugar”.

Wealthy refugees from the colony of Santo Domingo  who fled after the slave uprisings of the 1790s brought many important benefits to New Orleans so the idea that the cocktail originated in this place at this time is highly credible.