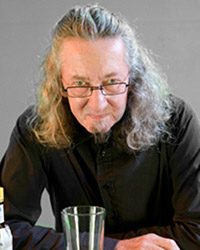 Juliet Lawrence Wilson gets up close and personal with Mr. Mixology himself, Gary Regan, aka the god of cocktails.

So first question, was all this ‘meant to be’, what with you being born ‘over a pub’?

GR: It’s worse than that.  My parents got out of the biz when I was two cos Mum said I shouldn’t be brought up in a flat over a pub, then, when I was 12, they got back into the pub game.  I was pulling pints by the time I was 14.  So yes, I guess this was meant to be—though we do have free will, you know…

GR: I moved to NYC when I was 22, and I had to learn about cocktails quickly cos I needed a job, and I couldn’t be a bartender in New York if I couldn’t make decent cocktails.

Did you have a mentor in the early years?

GR: My dad probably taught me the most important stuff—how vital it is to really care about your customers—then, in New York, Dave Ridings, a guy I knew from England, and Kevin Noone, an Irish bartender who I worked with, both taught me much about the game from a cocktailian point of view, and like my Dad, they both pointed toward the job of the bartender as a “benevolent dictator”  (my words, not theirs).

Why did you move Stateside?

GR: I had wanted to live in New York since I was about 8.  I was a Superman comic-book freak, and as far as I was concerned, Metropolis was New York.  Also, back in the 70s, America got everything years before we got it in England.  That’s changed now, but it used to be the case.  Add to that that my first marriage had just broken up (and I was just 22 years old), and moving to NYC just made sense.

You are ‘on the road’ quite a lot, where do you like visiting and what have you discovered recently?

GR: I love coming back to the U.K., I love San Francisco, I love being in New York Fucking City (I live about 55 miles north of the Big Apple these days), and I also love La Belle France.  Especially Provence.  I can relax in Provence.

Tell us about your open letter to Obama?

GR: It was a bit of a wheeze, really.  I was compiling recipes for our new iPhone app (Flip ‘N’ Drink), and I knew that it was imperative to give metric measurements as well as imperial measurements if we wanted to sell the thing worldwide.  Then I though, wait a minute, I have a column in the San Francisco Chronicle.  Maybe I could say something there about getting America to join the rest of the world in using metric units—in some ways America is far behind you guys in Europe.  I talked to my editor about it and he told me that if I could figure out how to put it into one of my cocktailian columns, he’d print it.  Truth be known I was praying that Obama would react in some way, but I’m still waiting by the phone . . .

What’s going on in the gin world that excites you right now?

GR: I’m writing a book about gin right now.  Why?  Because I think it’s the hottest spirit in this decade.  So many new bottlings have appeared of late, with so many new styles, and although I stick with the straightforward, juniper and perfume way up front bottlings for my Dry Gin Martinis, the new fruiter, more floral, “gentler” gins provide us with fabulous bases to create new drinks.

Any top tips for wannabe mixologists?

GR: Start with the classics.  Learn how to make a good Daiquiri, Whiskey Sour, Old-Fashioned, Dry Gin Martini, Manhattan, Rob Roy, Sidecar, Margarita, and a few others before you start branching out.  Also, it’s absolutely necessary for you to have an intimate knowledge of the flavour profile of every ingredient you use in a cocktail.  Otherwise you’ll never achieve balance.

Is it true you call yourself a bartender rather than a mixologist? Why do you think this is important?

GR: Absolutely true.  A guy at the London Bar Show said this a few years ago, and it sums up my feelings about the matter:  “A mixologist makes my drinks; a bartender makes my night”.  Many mixologists are also fabulous bartenders, but lots of fabulous bartenders can’t make a decent Margarita to save their lives.  I much prefer to be known as a bartender.

How would one go about creating a new recipe?

GR: The easiest way is to take an established recipe, and switch out one ingredient, but you must make sure that you replace it with a similar ingredient.  You can’t take the Cointreau out of a Pegu Club, for instance, and replace it with tequila, but the drink could work very well indeed if you used, say, Limoncello, instead of Cointreau.

What’s your favourite bar or bars?

GR: In England I like old-fashioned pubs.  The Bay Horse in Thornton, Lancashire, is my home base.  In New York I like to hang at the bar at the Ritz Carlton where Norman Bukofzer, my all time fave bartender, works, and I also love Death & Co, Flatiron Lounge, Clover Club, and any old Irish gin mill with a gruff bartender.

Who in the industry do you most admire?

Describe your ideal night out.

GR: A night at the Bay Horse drinking pint after pint of good draft bitter

Who would you spend it with?

GR: My oldest and dearest friends, Bill Greenham and Stan Ogden, and if he could make it, my best friend in the States, Stuffy Shmitt. If I could choose to drink with historical people I’d have a few jars with Jesus and the Buddha—we’d have a blast.  Buddha would be the designated driver, of course. It might be fun to see what Deepak Chopra’s like with a few G & Ts in him, too . . .

GR: I like a lot of gin with a splash of tonic and a squeeze of lime.

What’s going to be the next big trend in the cocktail world?

What’s the recipe for your favourite gin cocktail?

You seem to be interested in drink history and unusual facts – any interesting tit bits to share with us?

GR: They must take them, I should say, medicinally, as cordials for that complaint which Albert Smith’s old-lady patient used to call ‘spiders at the heart,’ and for which Albert’s invariable and gratefully received prescription was gin coloured pink, with cardamoms.”  Paris Herself Again in 1878-9 by George Augustus Sala, 1884.

GR: To get a piece of my mind

What have you got planned for the future?

Watch this space for Gary’s Bartender’s Gin Compendium, it will be a treat and check out Gary’s site – www.ardentspirits.com