In the first of an occasional series, Juliet Lawrence Wilson looks at the heyday of one of the world’s most famous watering holes… 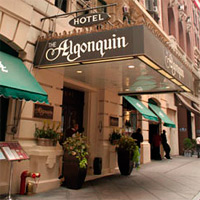 The Algonquin Hotel ­ or “The Gonk”, to the locals ­ is one of the most renowned literary hotels in the world. The Round table, founded in the hotel’s Pergola Room, became the home to the self- styled “Vicious Circle”, an unofficial club whose constitution demanded wisecracks, wit and wordplay at their daily luncheons. Members of the Round Table included the legendary Dorothy Parker, playwright and director George S. Kaufman, The New Yorker editor Harold Ross, publicist John Peter Toohey and critic and journalist Alexander Woolcott. Other interesting actors, writers and thinkers of the
time often joined them, including Tallulah Bankhead and Harpo Marx.

The Vicious Circle was aptly named: it came together in 1919 when John Peter Tooney played a practical joke on the famously pretentious Alexander Woolcott by inviting him to a “welcome home” party on his return from a stint as war correspondent for Stars and Stripes magazine. Toohey used the celebration to mock Woolcott, but fortunately the critic saw the funny side
and the success of the event led Toohey to suggest the gathered luminaries meet at The Algonquin six days a week for lunch.

For a decade, the Vicious Circle or ‘Round Table’s’ influence spread across the States with many members writing up their conversations for publications all over the country. Often the meetings would go on late into the night with members decamping to one of their hotel rooms for a game of poker.

Gertrude Atherton thinly disguised the Vicious Circle as “The Sophisticates” in her 1923 bestseller Black Oxen:

“They met at the sign of the Indian Chief where the cleverest of them—and those who were so excitedly sure of their cleverness that for the moment they convinced others as well as themselves—foregathered daily. There was a great deal of scintillating talk in this group of the significant books and tendencies of the day… They appraised, debated, rejected, and finally placed the seal of their august approval upon a favored few.”

Dorothy Parker, who was only 25 when the group began and was the most famous
of the many whose enduring reputations for literary achievements and sparkling wit date from this time. She lived briefly in the hotel in 1924, after her second break up with her husband Eddie, and again in 1932, when she made her second failed suicide attempt. Subsequently The Algonquin has become a pilgrimage for Parker fans.

Naturally, there were those who didn’t want to join in the fun. Critics of the Vicious Circle accused them of nepotism, as they frequently reviewed one another’s work and many felt their witticisms weren’t quite off the cuff. Although his brother Harpo was an associate, Groucho Marx never aspired to be a member: “The price of admission is a serpent’s tongue and a half-concealed stiletto,” he said.

The Circle might never have come to fruition had it not been for the Algonquin’s first general manager Frank Case who became the owner in 1927 and installed the Round Table in the hotel’s Rose Room. Case always welcomed publishing and theatrical types, a tradition the hotel maintains to this day, offering a discounted lunch to struggling writers. Previously writers could claim a free bed for the night on production of a signed copy of their book, though perhaps with the advent of self-publishing this generous offer no longer stands. The hotel now has walking tours and a gift shop selling Round Table memorabilia. As Parker herself once quipped: “A little bad taste is like a nice dash of paprika.”

Case must have heard many a catty remark coming from the Round Table but he was also generous to felines of the animal kind. After taking in a stray in the 1930s and naming it Hamlet at the suggestion of John Barrymore, the Algonquin has had a hotel cat ever since. Males continue to carry The Prince of Denmark’s name and females are called Matilda. The current Matilda has the run of the hotel (except for the kitchens and dining room) and can often be found on her chaise longue in the lobby. Matilda has many friends from
around the world who email her regularly and her annual birthday party is one of the most sought after invites on any NYC socialite’s calendar.

Today the Algonquin has suites named after eminent guests. The Dorothy Parker Suite features photos and facsimiles of her letters on the walls. Many of the hotel’s hallways are decorated with wallpaper made from New Yorker cartoons. But what became of the Round Table itself?

After ten years the Vicious Circle came to a sad end. Edna Ferber later recalled entering the Rose Room and instead of the bright sparks of the day, found a family from Kansas dining at the celebrated table. Although this was the most productive time in Dorothy Parker’s career, in later life she was disparaging of her associates:

“These were no giants. Think who was writing in those days—Lardner, Fitzgerald, Faulkner and Hemingway. Those were the real giants. The Round Table was just a lot of people telling jokes and telling each other how good they were. Just a bunch of loudmouths showing off, saving their gags for days, waiting for a chance to spring them… There was no truth in anything they said. It was the terrible day of the wisecrack, so there didn’t have to be any truth…”

Yet the legacy of the Vicious Circle lives on and it’s doubtful that there
has ever been a more memorable, celebrated and envied club of thinkers,
writers, editors, critics and wits.

Look for “Martini on the Rock,” on the Algonquin’s cocktail menu. This pricey drink consists of a martini of the buyer’s choice with a single piece of “ice,” a diamond, at the bottom of the glass. Whilst sipping, this little witticism of Dorothy Parker’s might come into your head: “If you want to know what God thinks of money, just look at the people he gave it to.”