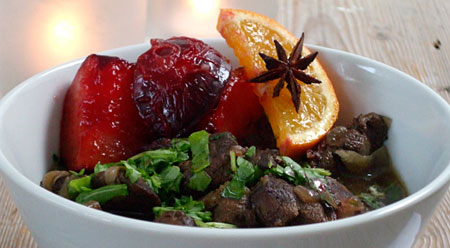 With the Autumn nights drawing in there’s no better way to liven up your evenings than with a dash of gin in your cooking. Juliet Lawrence Wilson shows how versatile an ingredient your favourite tipple can be.

For the soused plums:

Marinade the venison a day before you intend to cook it: Place the venison in a large bowl, cut the oranges into quarters, squeeze them over it to release their juice then put the squeezed quarters in too. Add the rest of the ingredients, mix well, cover and leave in the fridge overnight.

Preheat the oven to 170oC/Gas 3. Remove the venison from the marinade and pat dry with kitchen towel. Strain the remainder of the marinade and pour into a casserole dish. In a large frying pan with a little of the oil, brown the venison meat on all sides in small batches then place in the casserole dish. Fry the onion gently in a little oil until they have turned golden. Add the garlic and fry for a further minute then add the flour and fry for a minute more. Add the onion and garlic to the casserole dish. Add the stock and the orange to the casserole dish; mix the ingredients well and season lightly. Cover and cook in the oven for two hours or until tender. If you like vegetables in your casserole you can add a mixture of potatoes, carrots and parsnips half way through cooking.

When the venison is tender remove it from the casserole with a slotted spoon then reduce the gravy until it is a pleasing consistency. Put the venison back into the gravy and remove the oranges. Season to taste.

To make the soused plums: quarter and stone the plums and place in a small saucepan with the cloves, star anise and sugar then add enough water to come half way up the fruits. Bring to the boil then simmer for a couple of minutes until the plums are very tender. Infuse them for at least two hours or preferably overnight. Remove the plums from the liquid and set aside. Discard the cloves and star anise then bring the liquid to a simmer and allow it to reduce by one third. To serve: place the plums in the liquid and bring to a simmer. Add the gin and allow it to simmer for 30 seconds then remove it from the heat and serve with the venison casserole.

Pear, Vanilla and Gin Sorbet with a Caramelised Pear Garnish 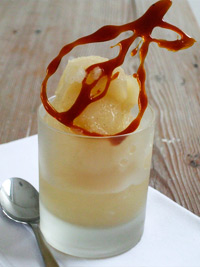 Place the pears, sugar and vanilla seeds into a small pan and add enough water to barely cover the fruit. Simmer for five minutes then remove from the heat and allow to cool. Add the gin and liquidise. Churn in an ice cream maker following the manufacturer’s instructions then freeze until firm. Alternatively, put the mixture into a freezer-proof container, freeze for two hours then break the ice crystals up with a fork. Repeat this process another two times.

Melt three tablespoons of castor sugar, over a low heat, in a small pan until it is a light golden brown and all the sugar has melted. Using a metal spoon drizzle the caramel onto a sheet of non-stick baking parchment in the shape of a pear. Allow to cool and harden, then gently peel off.