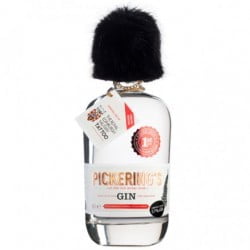 Pickering’s Gin, based at Summerhall in Edinburgh, has just announced that it has become an Official Sponsor of the world famous Edinburgh International Festival. This new pairing builds on the existing partnership between Pickering’s and The Royal Edinburgh Military Tattoo celebrated by the release last year of a special Military Tattoo gin complete with jaunty bearskin hat.  Bottled at a hefty navy strength 57% ABV the limited edition gin is still available to buy here –

Another limited gin is in the pipeline and this time Pickering’s, as the Official Gin of the Tattoo, will be producing a commemorative bottling to celebrate the 2015 Tattoo theme of East meets West. Highly appropriate given that Pickering’s is based on an authentic recipe from the last days of the British Raj in India. Roll on August!

And strange but true, gin and military tattooes have a lot in common as both originate in ancient drinking customs from the Netherlands.  A tattoo is a military performance of music and the word comes from the early 17th century Dutch phrase ‘doe den tap toe’ (“turn off the tap”), the nightly signal sounded by army drummers or trumpeters to let innkeepers near military garrisons know it was time to stop serving beer and tell the soldiers to return to their barracks!