We’re loving the images from the new Chivas Brothers’ ‘This is My London’ marketing campaign for Beefeater. The campaign is to introduce “like-minded consumers to three real Londoners who epitomise the creative, individual style that both Beefeater Gin and contemporary London share”. 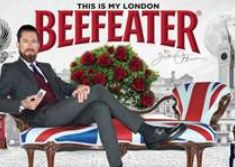 ‘This is My London’ kicked off in November with an outdoor advertising campaign in Spain – Europe’s largest gin market.  Each execution features a real Londoner under the strapline: This Is My London and the ads featured in print media and billboards nationwide. The three characters are now being introduced to consumers worldwide through a series of short films, with each of the Londoners telling the story of what London means to them. The films will be promoted through digital media to encourage consumers to share them with friends and will be accompanied by the hashtag, #MyLondon.

At the same time creative Londoners are being invited to contribute to the design of a new limited edition bottle for 2013 by submitting photos of what London means to them on the campaign website, beefeaterginmylondon.com.

Twenty winning images have already been selected and can be seen here – http://www.beefeaterginmylondon.com  This is great idea and a great campaign explained here by Paco Recuero, global brand director for Beefeater said: “As the only international gin brand to have its own distillery in London, Beefeater is uniquely placed to tell the stories of modern London to gin fans worldwide. Building on the success of Beefeater advertising to date, we wanted to bring the city to life even more for our fans with the ‘This Is My London’ campaign by telling the stories of how London influences the lives of its most eclectic inhabitants today. We’re delighted with the campaign we’ve produced – it’s vibrant, exciting and engaging and really captures the spirit of Beefeater Gin and contemporary London, so we’re confident it will capture the imagination of consumers worldwide and contribute to further growth for the brand.”

The ‘This is My London’ campaign follows a strong sales performance for Beefeater in recent years as it has taken advantage of the global gin revival, resulting in annual sales reaching an historical high of 2.5 million cases in the year to June 2012.