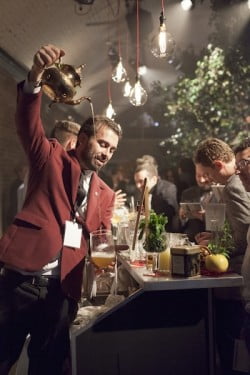 Beefeater 24, one of the world’s leading super premium gins, is inviting bartenders worldwide to showcase their creativity and mixology skills by entering this year’s Beefeater 24 Global Bartender Competition which, for the first time in the competition’s history, will see contestants creating two cocktails rather than one.

First launched in 2010 with four participating markets, the competition has grown in popularity amongst the global bartender community. This year, the competition will showcase bartending talent from 26 countries around the world, including the US, France, Hong Kong, Australia and the UK, highlighting the loyal following Beefeater 24 has built in the on-trade since its launch in 2008.

Entries to the competition close on 1st July 2013, after which stage, the 12 best entries from each country will be selected to compete in national heats between July and October 2013. Beefeater’s Global Brand Ambassadors, Tim Stones and Sebastian Hamilton-Mudge, will be travelling the world to meet the successful bartenders, with one of them in attendance at each of the National Finals.

National winners will then fly to London to compete in the Global Final, which will take place in the city on 7th November 2013. The overall winner will enjoy an all-expenses paid trip to Japan in 2014, where they will learn more about the teas that are so intrinsic to Beefeater 24’s taste profile and the local bartending culture. The winner’s name will also be inscribed on the Beefeater distillery’s Hall of Fame plaque.

Each contestant will also be invited to appear in the ‘Craft of Bartending’, a short film by Beefeater 24. This film will be shared following the Grand Final via www.beefeatergin.tv, which re-launched earlier this year and other social media channels.

Paco Recuero, International Brand Director for Beefeater 24, comments: “The third edition of the Beefeater 24 Global Bartender Competition is going to be bigger and better than ever and we are delighted to be welcoming entrants from 26 countries. The phenomenal growth of this challenging competition shows how Beefeater 24 has really captured the imagination of the global bartender community, inspiring them to embrace their creativity and develop their mixology skills.”

“Timing is at the core of Beefeaters 24’s philosophy, so our judges will be looking for the perfect balance from the entrants’ cocktails. We’re looking forward to discover some great new bartending talents and are excited about working with the winner to spread the word about Beefeater 24 in the year to follow.”

Nathan O’Neill, winner of the 2012 Global Bartender Competition and current bartender at Milk and Honey, an exclusive private members’ bar in London, comments: “The Beefeater 24 competition has been a huge, prevailing step in my career. The competition tests not only your knowledge as a bartender, but also your sensory capabilities, plus you need to showcase yourself personally. My advice to bartenders thinking about entering would be to go for it; it will change your future perspective and approach to your work, your career and the way you create drinks. It’s a competition that I could not be more thankful to have been involved in.”

Bartenders from around the world are invited to contact Beefeater representatives in their own country for more details on the competition.