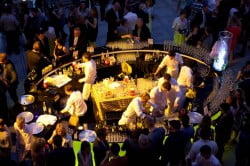 On Tuesday 29th May, Caorunn paid homage to one of the UK’s most exciting and creative designers by sponsoring the launch of Thomas Heatherwick’s first major solo exhibition – Heatherwick Studios: Designing the Extraordinary. The sponsorship is one of a series of London-based events that Caorunn have planned to celebrate timeless style, great craftsmanship and inspirational design this year.

The event, which took place in London’s iconic Victoria and Albert Musuem, attracted over 600 guests, including Joanna Lumley, Mary Portas, Danny Boyle and a host of leading talent from the design and creative industry. To pay homage to the man himself, Caorunn designed a bespoke cocktail, ‘The Thomas Heatherwick’ ,which was a huge hit with guests, who also enjoyed Caorunn’s signature G&T, which is created using Fentimans tonic and a slice of red apple. To create the bespoke cocktail, Caorunn’s brand ambassador Ervin Trykowski took a gin classic and re-imagined it as Heatherwick might to his surroundings. The drink, like the designer, is visionary – a modern Tom Collins.

Enjoy The Thomas Heatherwick this Summer:

Method: Build all ingredients in a tall glass filled to the top with ice. Stir and