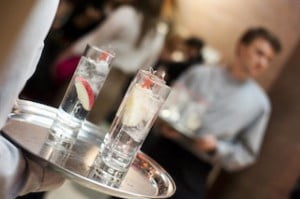 This Winter, Caorunn Scottish Gin has been celebrating Scottish style by sponsoring two exciting events. The two collaborations form part of a style-based sponsorship programme for Caorunn who partnered with Harvey Nichol’s at the opening of the newly refurbished National Portrait Gallery in Edinburgh to create a magnificent fashion show. The fabulous one night only show, which took place on 25th November, mirrored both the opulence of the venue and the stunning collection being showcased.

On the 2nd December, Caorunn joined forces with Aberdeen’s Bournville Village Emporium, a one off art infused pop up cocktail bar, where Caorunn Gin was used to create some innovative twists on early 20th century classic cocktails. The concept of ’The Bournville Emporium’ is to combine cocktails, design and music to create a social hub for creative industries. The evening was inspired by the illicit stills and the underground bar haunts of the 1920s.