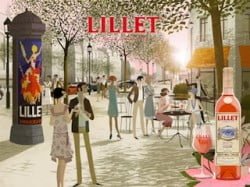 We’re all for this idea. Maison Lillet, the French apéritif producer, has just announced the launch of the first National Apéritif Day in the UK, on Thursday May 16th 2013. Inspired by the enthusiasm surrounding Lillet Rosé, their first new fine wine-based product in 50 years launched last year, Maison Lillet will be raising awareness of the tradition of whetting the appetite with a well-crafted drink.

The modern French apéritif was created in 1846 by chemist Joseph Dubonnet as a quinine ‘delivery system’ to help people ingest the malaria-fighting medicine. The drink soon became fashionable and the apéritif became a widespread ritual across Europe in the late 19th Century. Lillet was first blended in 1872 and soon became the quintessential apéritif enjoyed by the vignerons of Bordeaux, served on ice with a slice of orange and word quickly spread to the US and the UK. Lillet has been enjoyed as an apéritif during ‘l’heure de l’apéro’ ever since and the hint of quinine and low alcohol content in each blend not only gives Lillet a slightly bitter taste, but also whets the appetite without cloying the palate.

Gin and Lillet Blanc make perfect partners notably of course in James Bond’s famous Vesper, one of the classic aperitif cocktails, and we’ll certainly be sipping sweetly come May 16th.