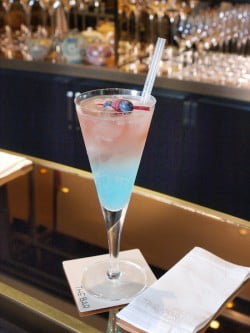 The Dorchester has teamed up with Fashion for the Brave to create a fabulous new cocktail – the “Cavalry Charge”. The cocktail is made of gin, wild strawberry liqueur, ginger beer, fresh lime and blue curacao.

Giuliano Morandin, Manager of The Bar at The Dorchester created the cocktail with legendary fashionista Hilary Alexander and Captain Damien Lipman of The Life Guards (Retired). The drink references the red, white and blue of the Union Jack and the addition of a decorative blueberry/strawberry/blueberry reflects the colours of the Household Cavalry.

Captain Damien Lipman of The Life Guards (Retired) says  “The Cavalry Charge, created, no; forged by Giuliano at The Dorchester, is an extremely refreshing way to give a patriotic toast and a nod of thanks to Her Majesty’s armed forces, especially The Household Cavalry; her personal bodyguard, in this, her Diamond Jubilee year.”

The Dorchester are generously giving £2 of every cocktail sold to the Household Cavalry Operational Casualties Fund (HCOCF).  Fashion for the Brave is a high profile fundraising black tie event and fashion show that will be held at The Dorchester on Thursday 20 September 2012. Claudia Winkleman will be hosting the evening, and Jeffrey Archer will be lending his talents to the prestigious auction – which last year included a limited edition Range Rover.

Fashion for the Brave raises funds for the Household Cavalry Operational Casualties Fund (HCOCF) and The British Forces Foundation (BFF).  The HCOCF provides financial support to injured soldiers and their families, including those who have lost their lives on active service.  BFF boosts the morale of servicemen and women on the frontline and in operational theatres all over the world, primarily through high quality entertainment.

Sponsored by The Dorchester, Vestra Wealth and Boodles, supported by the British Fashion Council,  the black tie event will feature a catwalk show featuring the best of British brands and will be attended by British stars of fashion and film.

The Cavalry Charge is £17, exclusively at The Bar at The Dorchester.