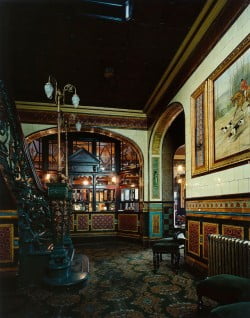 It’s worth seeking out a proper gin palace to properly celebrate World Gin day this Saturday 13th June. Although none of the original gin palaces survive intact, their ornate, over the top design inspired later Victorian pubs, even after gin had fallen from favour. And, despite the vandalism of the 1970s, there are still quite a few of these left mercifully.

The first gin palaces were built in the late 1820s in order to compete with the new fancy pubs brewers were building to entice the passing trade. Thompson & Fearon’s in Holborn, and Weller’s in Old Street were amongst the first and were designed to look more like the shops that were appearing in fashionable districts. Gas-lit and fitted out in lavish style, the gin palace aimed to attract the crowds and to serve them as efficiently as possible 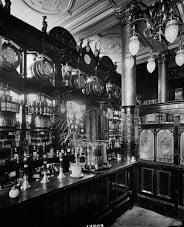 A key feature of the old rackety gin shops was the counter; it enabled swift service, separated the customer from the server and provided a surface for pouring drinks. The new gin palaces kept the counter and it eventually became the bar we see in almost every pub in the country. It was ideal for attaching beer pumps, saving on trips to the cellar. But instead of gloomy surroundings and dirt floors, gin palaces boasted dazzling light fittings, mirrors, ornate mouldings and glass.

The new luxurious gin palaces were hugely popular and by the 1850s there were some 5,000 in London. For the poor the gin palace offered a fantastical chance to escape from the grimness of slum dwelling.  In Sketches by Boz, Charles Dickens described gin palaces as “perfectly dazzling when contrasted with the darkness and dirt we have just left.”

Here are a few suggestions for places to get into full gin mode this weekend:

A rich example of a Victorian public house interior. Gents should also spend a penny in the basement WC to see some of the original tiled walls and fittings.

Look out for stone sculpture of musicians and musical instruments amid the rich copper and glass interior. Another perk for the gents’ – the toilets survive in their original decorative design.

Previously known as the George and Dragon, The Baker’s Vault was built around 1775 and rebuilt in the gin palace style in 1861. It reopened in July 2014 after a seven month closure and it is hoped that the revitalised pub will bring much needed regeneration to the market area of Stockport.

The fine pub interiors include a wall of alternating mirrors and fine paintings of Pre-Raphaelite style women set in marble and alabaster architraves.

Magnificently elaborate, the entrances have ornate wrought-iron screens and elaborately tiled lobbies and mosaic. The large room at the front was at one time a concert room. Sip your G&T in the large billiard room beneath the vine painted glass roof.

When the Tottenham was built it was located a few doors down from the Oxford Street Music Hall and there is something of the palace of varieties about its interior. One of the best-preserved pubs in London.

Although only a stone’s throw from Oxford Circus, parts of this pub are little changed from Victorian times. Particularly impressive are the large mirrors which miraculously survived the blitz.

A barrel vaulted skylight will greet you at the entrance, leading you to a bar with much of the original design. The previous building on the site was renamed the “Punch Tavern” in the late 1840s because of its association with Punch Magazine which had its offices at that end of Fleet Street.

Known locally as ‘the Big House’, this much loved local landmark has a glazed cupola, original bar fittings and two fire places.

Add to this impressive list two more we know very well – The Café Royal in Edinburgh and the famous Crown Bar in Belfast and we’ve pretty much got the country covered.