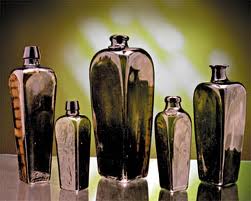 Geraldine Coates looks at the other side of the fashion for a return to the past in gin and classic cocktails.

It seems that currently one can’t get through a day without a missive popping into one’s inbox bearing news of a gin that is embracing gin’s roots and returning to the original taste of a bygone age. The main thrust of all this activity is to produce a spirit that allows modern bartenders to make vintage cocktails taste they way they would have tasted back in the day.

Whilst the thinking behind this can rightly be admired, there are fundamental flaws with it on a practical level. Most importantly we can’t really know exactly how gin tasted two hundred or even one hundred years ago but we can have good reason to suspect that it would not have been a drink that modern gin lovers would have embraced.

For example here’s an early 18th century recipe that I unearthed from the actually quite respectable firm of Beaufoy, James and Co in Vauxhall:

•            Oil of turpentine (used because its piney, resin flavour mimicked the flavour of juniper berries but was much cheaper)

According to the very splendid gin historian, Patrick Dillon approximately five million gallons of gin were made from recipes like this in London in 1735. So it’s authentic all right.  But would we really fancy a Martini made with gin that was made from a rough spirit flavoured with turpentine? Possibly not. At the same time there were more upmarket distillers who copied the Dutch. Ambrose Cooper’s 1757 book, The Complete Distiller, was the distiller’s bible and his recipe for Geneva goes like this:

“for making 10 gallons of Geneva—take of juniper berries three pounds, proof spirit 10 gallons [proof was then equivalent to 51% abv] water 4 gallons. Draw off by a gentle fire until the feints begin to rise and make up your goods to the strength required with clean water. The Distillers generally call those goods which are made up proof by the name of Royal Geneva; for the common sort is much below proof, ten gallons of spirit being sufficient for fifteen gallons of Geneva”.

Far better as it does not have poisonous chemicals and it does have juniper but, given that continuous distillation was yet to arrive, we can safely assume that the ‘proof spirit’ would bear little resemblance to the NGS of today and would be pretty harsh with strong fusel oil flavours. G & T?  no thanks.

Fast forward 150 years or so and continuous distillation technology has advanced but the wide scale reform of regulations governing distillation in the late nineteenth century have perhaps not yet been completely implemented. There were not the rigorous controls there are today over the quality of the spirit.

I was reminded of this as I’m currently updating “The Mixellany Guide to Gin” and looking again at Old Tom Gin. In taste terms, Old Tom gin is often described as the missing link between Dutch genever and modern Dry gin. It’s not quite as simple as that. Having encountered a bottle of Old Tom Gin from about 1890 in the offices of Beefeater Master Distiller Desmond Payne, it was interesting to discover that it tasted more like new make whisky than genever. Believe me it was not something that would have improved the flavour of your Martinez or Tom Collins unless of course you really like top notes of kerosene. And given that distillers often used the same botanical recipes for both Dry and Old Tom but added sugar to Old Tom it’s not a leap to believe that this is what a lot of late 19th century gin tasted like.

The history of distilling over the past three hundred years is really the history of a relentless drive towards improvement and quality through technological advances and investment in the best equipment. We should be delighted that gin has progressed from rotgut swill to the sophisticated spirit it is today as a result. And, whilst it’s great to see genuine experimentation and a passion for authenticity, I personally would rather see if focused on the future than the past.